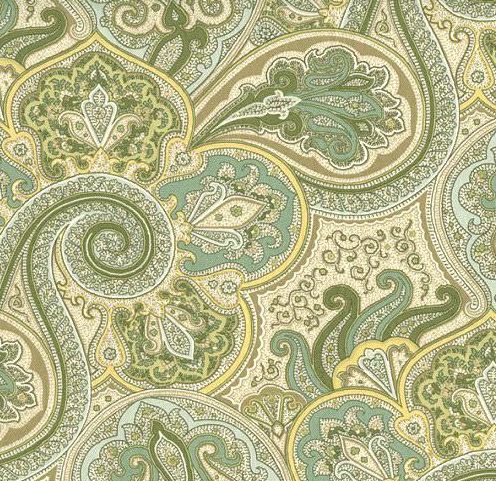 Description : A pattern that incorporates a droplet-like motif that looks like an asymetrical teardrop. Paisley prints usually also incorporate floral designs, scrolls and other embellishments.
Origins : Although shape is Indo-Persian in origin, its current name derives from the Scottish town of "Paisley". Believed by many scholars to represent a symbolic convergence between a floral design and the sacred cypress tree (Zoroastrian symbol of life and eternity), the shape is sometimes called a "boteh". The motif arrived in Europe in the 17th century following the influx of fabrics and other imports from India and Asia by the East India Company, where it was reproduced en masse via textile printing techniques. The shape was heavily promoted and embellished by the Scottish textile town of Paisley, from whence it derives its current name. Paisley prints were also manufactured in the Alsace region of France. The shape has been variously associated with the warding away of demons or as a symbol of change. It was a popular motif during the 1960s, due to its association with both vegetation and spirituality.
Example creations :
Uses worldwide : Paisley prints are widely used in Asian countries. In the west they are more frequently used in upholstery, pillows or quilts, but they are also used in dresses and blouses and sometimes as linings.
Translations : In Sanskrit, the paisley shape is known under the name "mankolam", possibly meaning "mango pattern". In modern Pakistan, the shape is often called "carrey" meaning "mango seed" in Urdu. The French call the shape "palme", a reference to the palm tree, also thought to have influenced the development of this shape. In German, the pattern is called "paisleymuster".