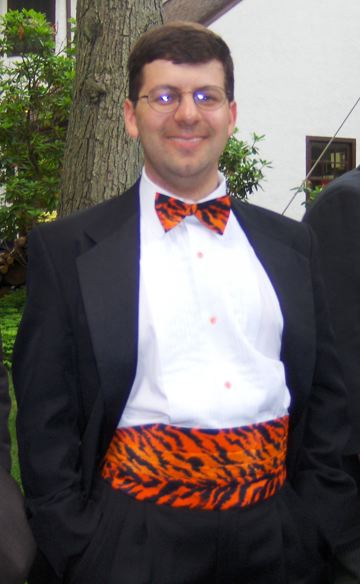 Description : A broad waist sash, usually pleated. Cummerbunds are traditionally black, sometimes midnight blue to match the trousers, and occasionally maroon, and also traditionally worn by men. Today they are often multicolored and matched to bow tie or other accessories, and increasingly worn also by women.
Subtypes :
Parts :
Preferred fabrics : Silk, satin, faille.
Construction : The pleats face up because they were originally used to hold ticket stubs and similar items. The fastening is a ribbon around the back, tied or held shut by a buckle or velcro.
Sewing problem areas :
Example creations : Cummerbund-bowtie set, silver cummerbund, several cummerbunds,
Example patterns : Making a cummerbund, Sewing a cummerbund, Tutorial for making a simple cummerbund,
Uses worldwide : The modern use of the cummerbund is as a component of the semi-formal black tie dress code, for example, worn with a single breasted dinner jacket. The contemporary use of the cummerbund is purely aesthetic, providing a transition between the shirt and the waistband, although it may also be used as kind of male girdle, to flatten the stomach.
Origins and history : The name "cummerbund" comes from the Persian "kamarband", meaning "loincloth". The wide cloth sash was part of the traditional male dress for India, Iran and parts of South America. In the 19th century, the cummerbund was adopted by British military officers in colonial India as a cool alternative to a waistcoat, and then entered fashionable use for men. Women adopted the cummerbund during the 20th century, for both day and eveningwear.
Alternate names : cummerband.
Related or similar garments : sash.
Wikipedia reference